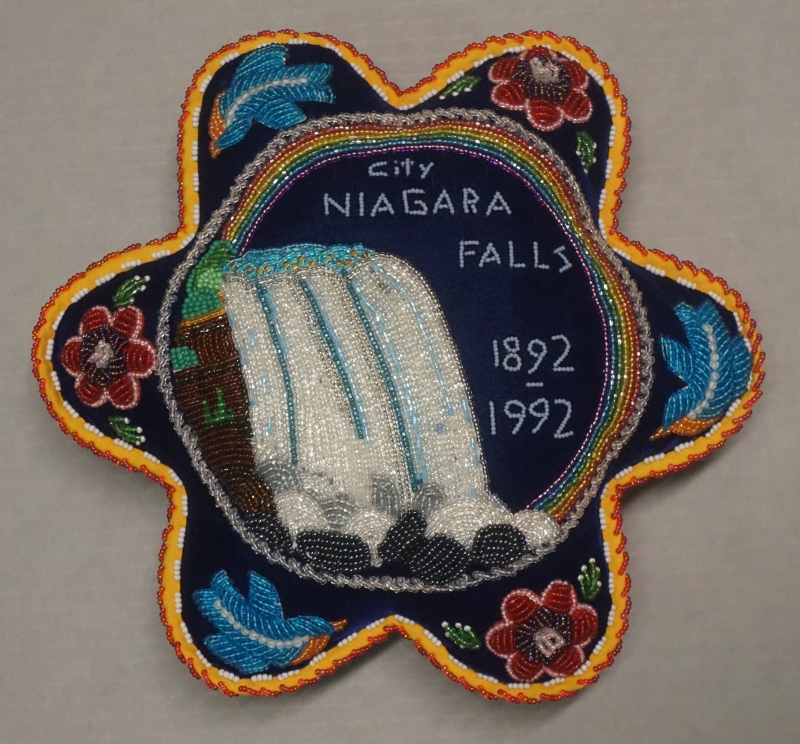 Detail image of a Niagara Falls Pincushion made by Marlene Printup, featured in the exhibition.

This ground-breaking exhibition traces the story of Iroquois beadwork from pre-contact times through the present. Displays explore the meaning of distinctive motifs and show how beadwork is made. Visitors can learn about the innovative style of beadwork developed by the Iroquois during the mid-nineteenth century. Built upon traditional Iroquois designs and popular non-Native Victorian fashions, beadworkers created a novel array of elaborated beaded “souvenirs” aimed specifically at tourist markets throughout the Northeast. Across Borders takes visitors on a journey of discovery – an exploration of how the art of placing thousands of tiny glass beads on fabric is intimately linked to the identity and survival of Iroquois people.

Across Borders was created in collaboration between a network of Native and non-native scholars, artists, and museum professionals across the United States, Canada, and Haudenosaunee nation territories: the McCord Museum in Montreal (QC), the Castellani Art Museum of Niagara University in Niagara Falls (NY), Tuscarora Nation community beadworkers, Kanien'kehá:ka Onkwawén:na Raotitióhkwa Language and Cultural Center in Kahnawake, and the Royal Ontario Museum in Toronto (ON).

Click here for a digital copy of the catalog.