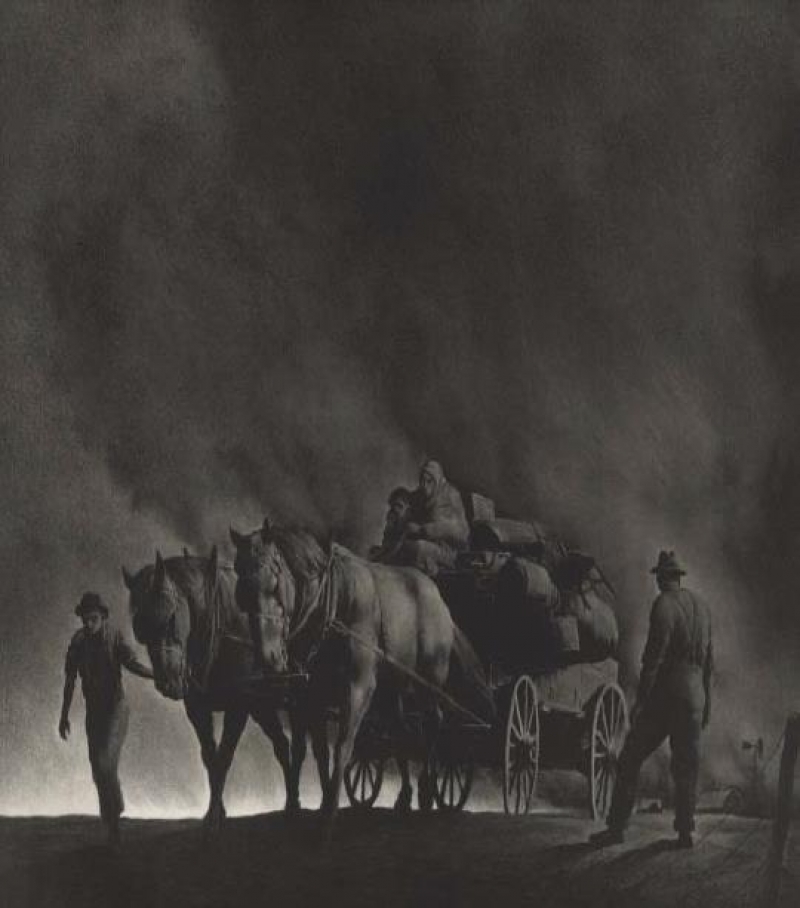 The iconic representation of the American farm evokes memories that readily cross generational gaps. Centuries of regional family farming communities across the country symbolize the honor of America, the ingenuity of her people, and plentiful natural resources of rich soil and favorable climates. In generations past, the primary family enterprise, or core of
America, was farming. Farming communities across the United States provided a bountiful cornucopia including fruits, vegetables, grain, and cotton for textile manufacturing. America’s bread basket reached far and wide, but was also central to local communities for employment, social connection, and community building.

I remember my grandparents’ farm in Chester County, Pennsylvania. Like many individuals of my generation, my idea of the family farm is relegated to memories and fading photographs. Like my grandfather’s farm, countless wide reaching fields, farm houses, and barns are now sanctioned victims to urban sprawl. Row upon row of vegetables and fields of grain have been displaced by housing developments, strip malls, and mega-mart “big box” retailers. Many of our fruits, vegetables, and grains now arrive to our supermarkets from Chile or Mexico and as far away as China.

As a child spending weekends at the farm, the pure joy of discovery was endless. The most magical and active place on the farm was the barn. The “buzz” of the electric fence transformer that kept the cows and horses in check, the earthy, cool air in the root cellar, and the continuous array of various insects were a celebration of the senses. Investigating the birds nesting in the eaves or wild cats living among the hay bales was an endless adventure. In the summer months, a myriad of vegetables were always readily at hand…just a pick and rinse away.

Rural America—Remembering the Family Farm was organized into thematic sections for a deeper focus into each facet of rural farming life.

The exhibition opened with a general look at the historical workings of the American farm. Childe Hassam’s Hay Barn (1920) and Thomas Hart Benton’s Nebraska Evening (1941) offered a dramatic look at the buildings and environments encompassing the family farm. John Steuart Curry’s Horses Running before the Storm (1930), depicts work horses fearful of the thunder and lightning of an oncoming storm. Roger Medearis’s Barnyard Gate (1990) catches the interruption of grazing cows just beyond the barn with the sounds of the farmer opening the gate for their return.

The exhibition continues with 'Farming Fundamentals', works focusing on the daily labor of farmers. Grueling field work including plowing and threshing is shown in John Ward McClellan’s Plowing (ca. 1936), where a shirtless farmer toils to plow the soil with a hand-cultivator while his wife quietly follows with seeds for the freshly turned earth. A farm worker is rewarded by a moment of contemplation, as seen in John Stockton DeMartelly's Looking at the Sunshine (1938), where a laborer, wearing just overalls, rests his head on one arm upon a stack of building materials to survey the exhausting work ahead of him.

'Landscape and the Elements of Architecture' continues the thematic installation with works illustrating the unique architectural history of barns and farm houses. John Steuart Curry’s Kansas Wheat Ranch (1929) is a look at a very modest 1920s Midwest farm with little more than a two-story farm home, storage building, manure spreader, and a barbed-wire fence. The wood engraving Break of Day (1944) by Asa Cheffetz features a Vermont farm at its zenith. The timber frame three-story farm home, known as a “New England Large House,” is accented by a glorious barn with a four tier pitched roof and early octagonal silo made of wood. Grace Thurston Arnold Albee’s The Boyer Place (1946) is a look at a Bucks County, Pennsylvania farm with a predominantly located corn crib—needed to properly dry corn in this region.

The final section of this exhibition is 'Change—Phasing out the Family Farm'. This section focuses on the change and decline of the family farm. Due in part to natural disasters—particularly in the Midwest, foreclosures, population shifts, and modernization, these works highlight changes in the design and preservation of the farmstead. Robert Riggs’s Dust Storm (ca. 1941) illustrates the torment and sorrow of a family abandoning their farm in trepidation of an approaching dust storm which was sure to leave ruined crops and barren fields in its wake. Witnessed in Roger Medearis’s Summer Hay (1947), the modernization of combine machinery replaces stacks of hand threshed hay with large, uniform hay bales.

Rural America—Remembering the Family Farm provided visitors with an historical look at the evolution of the family farm. Capturing elements of invention, architecture, and production, artists have captured the American spirit through the print medium. A hard day’s work and community solidarity for the greater good of all, create nostalgia for those simpler times.